Book your ticket for the New York Hop-on, Hop-off Bus, Classic Tour (24-hour ticket) and discover the Big Apple at your own pace! 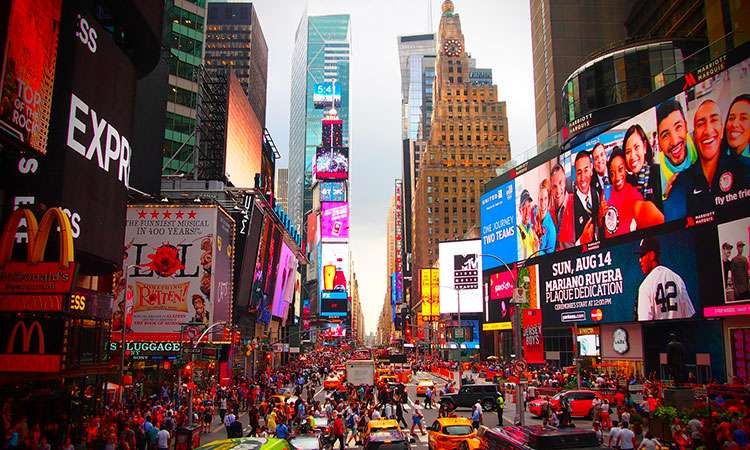 Discover New York with the two routes included in the Classic 24-hour formula. Throughout your journey, the friendly on-board guide will tell you all about the city’s most famous monuments and attractions. Get on and off the bus at your leisure and explore New York City thanks to the strategically located stops close to famous landmarks such as the Empire State Building, Times Square, the One World Trade Center and many more!
The classic route will take you to both Uptown and Downtown. Downtown includes famous places like Times Square and the Empire State Building and of course there’s the amazing Brooklyn Bridge along the way too. During the Uptown route you will also see parts of Midtown, including Penn Station, before heading further north to admire the views of Central Park and Museum Mile.

All in all, these two circular routes stop at more than 25 key points of interest as they make their way through spectacular New York City.
Explore Uptown by taking the Blue Route and visit both Midtown and the Upper East Side.

Discover the cultural capital of Manhattan on the “Explore Uptown” route. You will pass by some of the city’s most important museums, galleries and theatres including the Met and Madison Square Garden. Visit Central Park and Madison Avenue and enjoy the panoramic views of Times Square.

To explore Downtown and immerse yourself in the heart of New York, you’ll be taking the Red Route. You will pass through such emblematic areas as Times Square, 5th Avenue, Broadway and Wall Street. Along the way, look up to take in the vertiginous heights of the city's famous skyscrapers; from the Westside Highway, you’ll be treated to splendid views of the world-famous Statue of Liberty and Ellis Island. Throughout your journey, your guides will share amazing facts and stories while pointing out the most interesting sites and monuments along the way.
You can also take advantage of the on-board headphones to listen to the pre-recorded commentary available in the following 10 languages: English, Spanish, French, German, Italian, Portuguese, Japanese, Mandarin, Korean and Russian.

Head to any Big Bus stop in New York

Children under the age of 3 travel for free!
Reduced rates for children 3-12 years old
Buy now and use your ticket any time in the next 6 months.