Jump aboard a 4x4 and embark on an exciting safari in the Dubai Desert. You’ll be embarking on a seemingly timeless adventure in an otherworldly landscape. 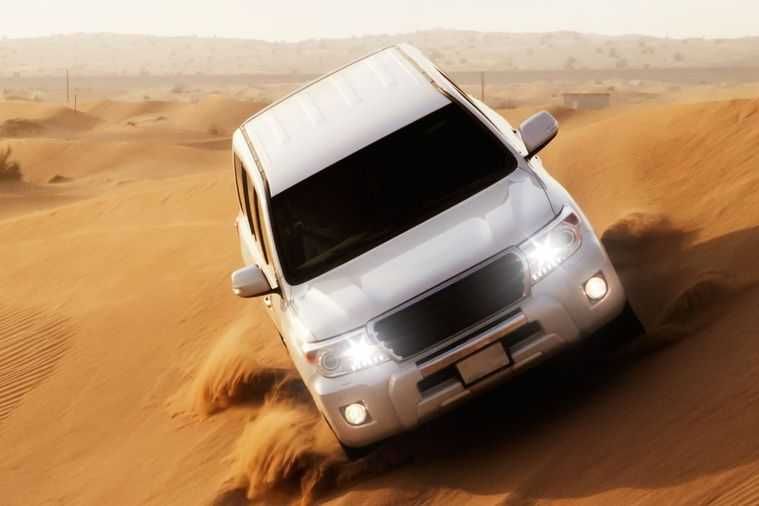 Jump into a 4x4 and head for the Arabian desert! This excursion in an all-terrain vehicle will take you to discover an authentic sea of sand extending as far as the eye can see.

An experienced and English-speaking driver will take you on a thrilling adventure to the dunes of Dubai. The trip takes about 20 minutes plus a 15-minute visit to a camel farm. It’s a golden opportunity to take some great pictures of the region's famous humped animals.

"The empty quarter”, as one of the largest sand deserts in the world is known, covers nearly 650,000 km2 and straddles all of the following countries: The United Arab Emirates, Saudi Arabia, Oman, Dubai and Yemen. These dunes, that extend as far as the eye can see, became famous in the fifties thanks to the writings of the British explorer Sir Wilfref Thesiger. Every February, off-road vehicles compete against each other at the Liwa International Festival, to climb one of the world’s highest sand hills, the Moreeb Dune, which is 300 meters high!

Step 1 - The driver pick you up at your hotel

Any hotel in Dubaï , Dubaï

Step 2 - Enjoy your ride in the desert

For your comfort, your 4x4 will pick you up directly at your hotel in Dubai around 9:30 am and also drop you back at the end of the morning.

This sand dune adventure has a discounted rate for children aged under 11.