Immerse yourself in the past and explore the architectural delights of the ancient Roman Empire! Your guide will take you inside the Colosseum and explain all about this monumental symbol of Rome. Following the visit to the amphitheater you will be taken to the Forum Romanum, a short 5-minutes walking distance away, where you will get to see the astonishing ruins of the "Eternal City". The visit culminates at the Palatine Hill with its breathtaking views of Rome. The tour price includes a Skip the Line Ticket with priority access. With this ticket you will be able to skip the long queues and make the most of your time in the city. 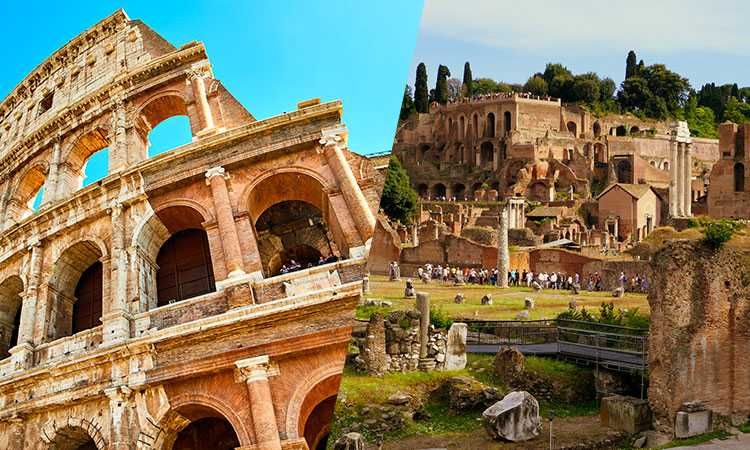 On the day of your visit, please be at the meeting point 30 minutes before the tour's scheduled time. Present the voucher that you will have received by email to your guide. This is where your journey back in time begins! Entry to the Colosseum is via the priority access entrance and your guide will explain all about life in ancient Rome including its gladiator fights and public performances. You'll probably feel much like the spectators of the time! The Colosseum, also known as the Flavian Amphitheatre, is the largest amphitheater in the world. It was used for gladiatorial contests and public spectacles and was the epicenter for the city's entertainment, hosting all kinds of games such as gladiator battles and exotic animal fights. It could hold between 50,000 and 80,000 spectators. Your guide you will take you then to the Roman Forum which was the center of day-to-day life in ancient Rome. All of the city's most important structures were located in the forum: temples, tribunals, basilicas, squares, and markets. Your tour will end at the Palatine Hill, one of the Seven Hills of Rome. It is the most ancient part of the city and at the time was considered to be one of the best neighborhoods. It is a major archeological site with the ruins of many ancient Roman constructions such as the Hut of Romulus, the Stadium of Domitian and the Flavian Palace. From Palatine Hill, you will enjoy an amazing view of the "Eternal City".

Step 2 - Head to the Colosseum

Please be at the meeting point 30 minutes before the tour’s scheduled time.

For safety reasons, no luggage or large backpacks are allowed inside the Colosseum.

All sales are final and, unfortunately, no refunds can be given.

Great guided tour, our guide was knowledgeable and friendly. All in all very much worth the price of purchase.