Get unbeatable views of beautiful Florence by climbing to the top of Filippo Brunelleschi's magnificent dome that majestically crowns the Cattedrale di Santa Maria del Fiore or as it is better known... Florence Cathedral (Duomo di Firenze). Your guide will explain everything about this magnificent building, with its complex breath-taking architecture and its many symbols examples of Italian art and architecture at its best. Your guided tour also includes skip-the-line tickets so that you can  avoid the queues at the entrance. 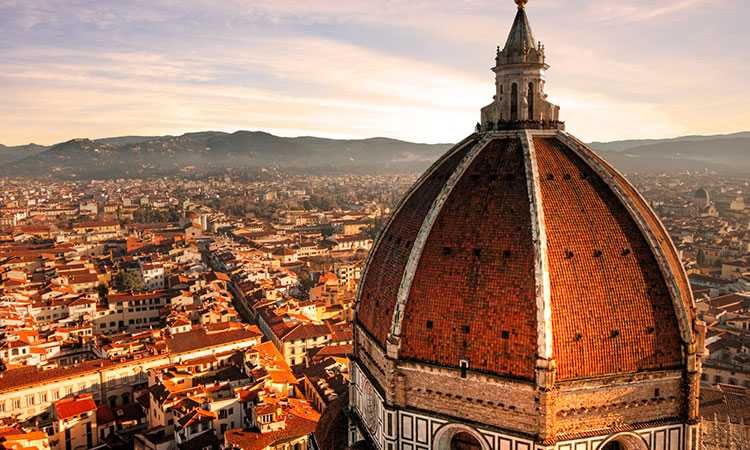 Enjoy priority entrance access to climb up to the top of the Brunelleschi's Florence Dome (Cupola), to visit an architectural masterpiece in the heart of Florence with a breath-taking panoramic views of the city. On the day of your visit you'll need to be at the meeting point 15 minutes before the tour's scheduled departure time. From the meeting point, your guide will take you straight to the Duomo di Firenze or Florence Cathedral, to visit its massive renaissance dome, which held the record as the largest dome in the world until 1881 and is still the largest brick and mortar dome in the world today.

By the beginning of the 15th century, after more than a hundred years of construction, the cathedral was still missing its dome, in part because the construction of such a huge dome posed many technical problems. It was Filippo Brunelleschi who would come up with the ingenious solutions for both the structure and the construction of the dome. He looked to other structures like Rome's Pantheon for inspiration but ultimately had to invent many of the techniques used himself.

After examining many options, he eventually decided on a double shell design using bricks instead of stone in order to save weight and to bring the enormous project to its very successful fruition. The inner shell of the dome was later  decorated by Giorgio Vasari and Federico Zuccari with an enormous fresco that took more that eleven years to finish.

Your guide will be on hand to explain all of the details before taking you up the 463 steps to the top of the dome. On the way, you'll get to see up close the colourful frescos by Vasari and Zuccari. Once you get to the top you'll see that the climb was well worth the effort when you're treated to a view of Florence that will literally take your breath away.

Step 1 - Go to the meeting point

Please be at the meeting point 15 minutes before the tour’s scheduled time.

Visitors wanting to see the dome will need to climb 463 steps. There are no lifts (elevators)

The climb is not recommended for people suffering from heart problems, vertigo or claustrophobia.

It was great to visit the dome and not having to wait. Our guide was good and understandable english speaking guide.