Who hasn't heard of Mont Saint-Michel? One of the most emblematic images of France, it as an Island commune just off the north-western coast of Normandy. Every year, more than 3 million visitors make the journey to see it. Why not come yourself? 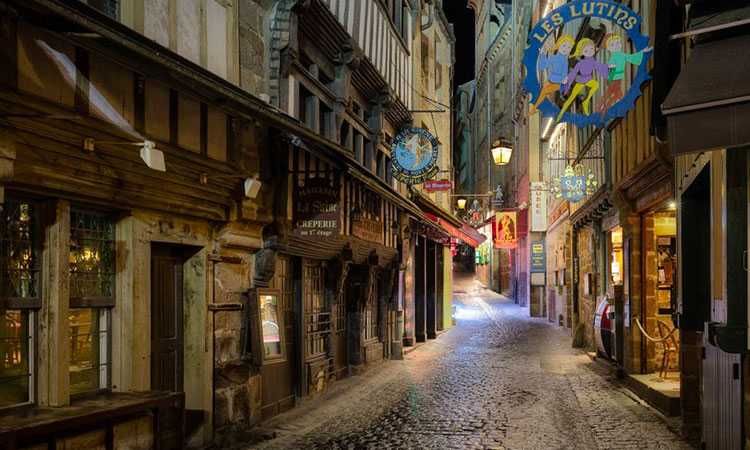 You will be met by your guide at the entrance to the Mount. You will then be taken through the narrow cobblestoned streets and below the ramparts of the old village. This village with more than 1,300 years of history has long been a place of fascination. A granite outcrop situated in a bay of the same name, it is equally famous for the high tides that cut off its access to the mainland at regular intervals.

As you follow your guide you will get to soak up the history of the place. Saint Michael's Mount (as it is known in English) probably dates back to about the year 708, when legend has it that Michael the Archangel appeared there and ordered the construction of a monastery at its summit. For hundreds of years to come, the island would serve as a strategic stronghold for the Bretons and the French, even resisting conquest by the English during the Hundred Years' War. Mont Saint-Michel is built on a rock that measures 84 meters at its peak. Made from pure granite it has easily weathered the passage of time but its construction has changed many times over the centuries. Through the Middle Ages and right up to the 19th century, different religious and military architectural styles have combined in such a unique way that today many consider it to be the eighth wonder of the world.

Your route will take you from the village entrance right up to its famous abbey. Along the way, your guide will share with you fascinating facts and anecdotes about the Mount's history. Walking along the medieval streets, you will get to see mysterious medieval dungeons along the way. You would be forgiven for thinking that you had travelled back in time. Nearly everything about Mont Saint-Michel is unique and not for nothing is it considered one of the most interesting places in France to visit.

Entry to the Abbey is not included in the tour but it is possible to purchase your ticket directly with your guide.

Don't be late! Try to be at the meeting point 15 minutes before the tour starts.

You will be met by your guide at the entrance to the Mount near the cannon that can be found on the right of the entrance.

A full refund is offered for any cancellations made more than 24 hours in advance.