With this tour, come and discover two of the jewels in the City of Light's architectural crown. Admire the amazing stained-glass windows of the Sainte-Chapelle before exploring Notre-Dame, the most famous cathedral in the world. Avoid the long queues at the entrance with our skip the line tickets. Our morning tours are like a voyage back in time! 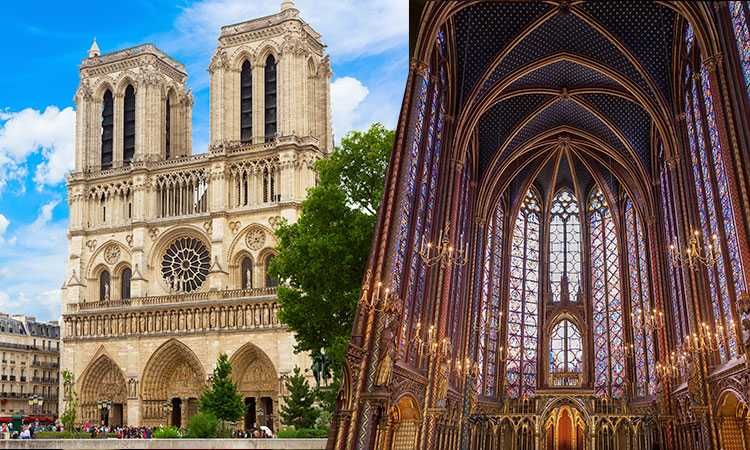 This tour, which consists of exploring two of Paris' most famous monuments, begins with a visit to the Sainte-Chapelle. Our skip the line ticket ensures you won't be waiting long outside. The Chapel, commissioned by Saint Louis in 1249, took only seven years to build. The King of France used the Chapel to house his collection of relics of Christ, including the Crown of Thorns, which was removed from the Chapel during the French Revolution. The stained-glass windows of the Sainte-Chapelle, chronologically depicting the life of Christ, are considered the maximum artistic expression of the French stained-glass movement.

After the Sainte-Chapelle, a short walk across the famous Île de la Cité will take you to the second part of the visit, the Cathedral of Notre-Dame, one of the most visited monuments in the world! It was built between 1163 and 1345 and today welcomes more than 20 million visitors annually. Thanks in part to Victor Hugo's resounding 1831 novel "Notre-Dame de Paris", the destruction of the Cathedral, once considered, was fortunately abandoned.
After exploring the inside of the Cathedral, soaked in its centuries of history, you can climb to the roof to see both its impressive bells and its famous gargoyles. The panoramic view of Paris from the roof of the Cathedral is not to be missed!

The tour starts at and lasts for three and a half hours. Please make sure to wear comfortable shoes!
The meet-up point for the tour is at the exit to metro stop Cité (line 4), on rue Lutèce.
As Notre-Dame is a place of worship, you will need to make sure your shoulders are covered inside the Cathedral. Please dress appropriately and maybe bring a scarf or a cardigan for use during your visit.
Please note that there are three hundred and fifty-seven steps up to the roof of the Cathedral!
Please also be aware that while there are toilet facilities at the Sainte-Chapelle, this is not the case for Notre-Dame.
Both monuments have wheelchair access.

All ticket sales are definitive and unfortunately, no refunds can be given.