Follow our guide and discover Park Güell, one of the most impressive works by Catalan artist Antoni Gaudí. 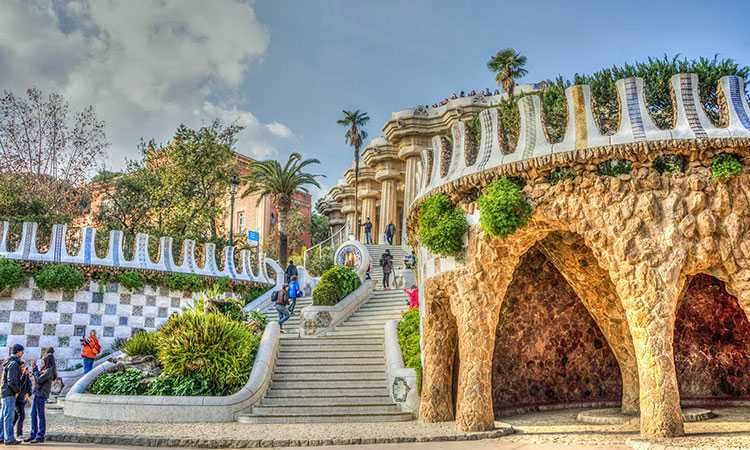 Discover the magnificent Park Güell, created by Antoni Gaudí more than a century ago in the hills overlooking Barcelona.

During this one-hour guided tour, you will have the opportunity to observe some of the most beautiful works of art by the Catalan artist, including the Casa del Guarda, the Hypostyle Hall or the giant salamander that adorns the staircase at the entrance to the park.
The original idea was for the park, named after Eusebi Güell, a friend and patron of Gaudí, to house a green city with sixty houses. In the end, only four of them were completed due to excessive budget overruns.
The site, a UNESCO World Heritage Site, became accessible to all in 1923 when the city of Barcelona took possession of it. It was at this same time that the first visitors were able to discover the park and its bizarre, highly embellished trees.

Step 1 - Pickup Your Ticket at the meeting point

The meeting point with your guide is at the following address: Carrer de Larrard, 55, 08024 Barcelona.
To get to the park, several different means of transport are available. The metro remains the simplest means of getting there, with two stations (Vallcarca and Lesseps) serving the surrounding area. Bus number 24 from Plaça Catalunya will also drop you off nearby.
Considering the park was built on a hill, people with mobility problems might find getting around a little difficult however. Although there are ramps and low steps, a companion is recommended in case of difficulty.
If you have any specific needs, do not hesitate to contact the park team at: parkguell@bsmsa.cat