Visit the hills overlooking Barcelona to discover one of Antoni Gaudí's most beautiful architectural creations: the Park Güell. It's situated on a 17-hectare site that carefully blends both nature and architecture.  Your entrance ticket also gives you access to the Casa del Guarda, located at the entrance to the park. 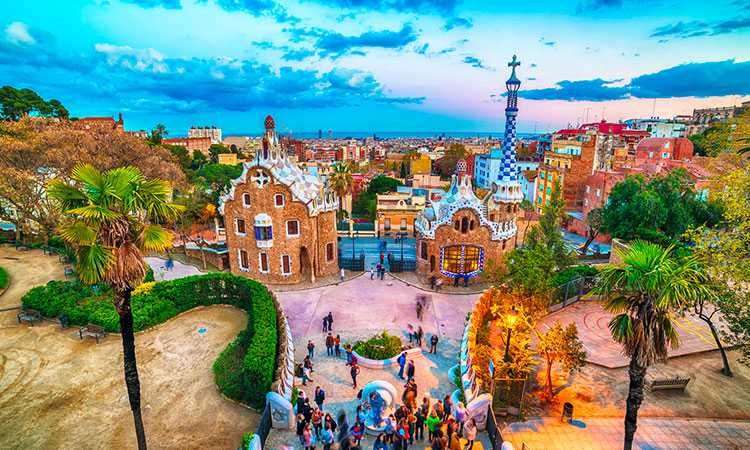 Let yourself be carried away by Antoni Gaudí's creative and fertile imagination and discover the magnificent Park Güell. The Park is quite unique in the way it integrates Catalan modernism into the heart of a huge garden.

The original idea was for the park, named after Eusebi Güell, a friend and patron of Gaudí, to house a green city with sixty houses. In the end, only four of them were completed due to excessive budget overruns.
In 1923, the park was given over to the city of Barcelona, thus permitting one of the Catalan artist's greatest creations to be enjoyed by all. Nearly sixty years later, in 1984, the park joined the very privileged ranks of the UNESCO World Heritage sites.
Park Güell now attracts visitors from all over the world who come to discover the fountains, mosaics, statues and the Hypostyle Hall with its one hundred Doric columns, this latter designed to represent the trees of a forest. Your entrance ticket is also valid for a visit to the Casa del Guarda, one of the two houses at the main entrance to the Park.

There are several different entrances to the Park. The metro remains the simplest means of getting there, with two stations (Vallcarca and Lesseps) serving the surrounding area.
The best entrance for people with reduced mobility, and/or wheelchair users, is located at 23 Carretera del Carmel. Bus number 24 from Plaça Catalunya will drop you off nearby.
Considering the park was built on a hill, people with mobility problems might find getting around a little difficult. Although there are ramps and low steps, a companion is recommended in case of difficulty.