During your stay in Barcelona, make sure to visit the Sagrada Familia, a magnificent cathedral designed by Catalan artist and architect Antoni Gaudí. With FastPassTours, enjoy a guided tour in Spanish. 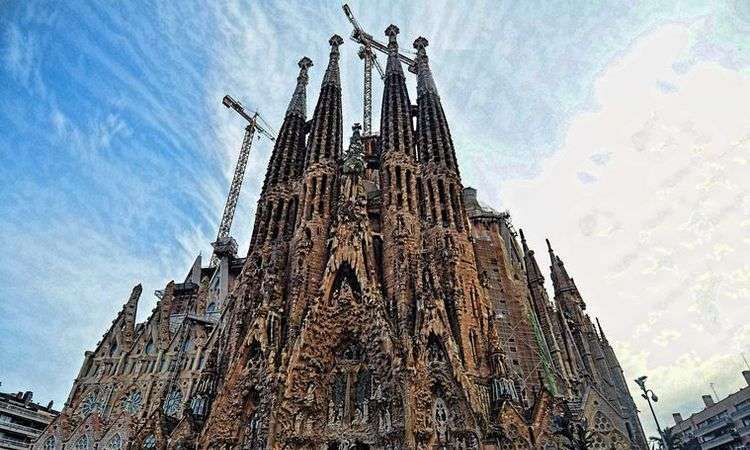 Meet us in the heart of Barcelona for a guided tour of the awe-inspiring Sagrada Familia. The cathedral, still unfinished after 136 years work, is Antoni Gaudí’s masterpiece. He was an architect who left an indelible mark on the Catalan capital with creations like the Park Güell and the Casa Batlló.

His artistic style, organic in nature, makes the cathedral reminiscent of a giant termite mound. The construction of the cathedral is a herculean undertaking intended for completion in 2026, one hundred years after the death of its architect.

With our skip-the-line ticket, you’ll be quickly inside the perimeter of Sagrada Familia where our Spanish-speaking guide will begin with detailed explanations of the cathedral's different façades. Gaudí left nothing to chance and every detail has its own significance. Following the explanation of the exterior façades, head inside the building for the rest of the visit and admire the beautiful stained glass windows from inside. At the end of the tour, don’t forget to visit the crypt with Gaudí's tomb and wander the museum of the building's construction, learning all about its many stages.

Step 1 - Meet your guide in front of the KFC

Avingunda de Gaudí, 2 , In front of the KFC , Barcelona

Step 2 - Go to the Sagrada Familia

This ticket is not valid for accessing the Passion and Nativity Towers.

Headphones are available so you can better hear the guide’s explanations.

This tour is carried out in Spanish.