At the top of the Champs-Elysées, come visit the most famous arch in the world: A monument built to commemorate France's military successes and honour the soldiers who fought in them. 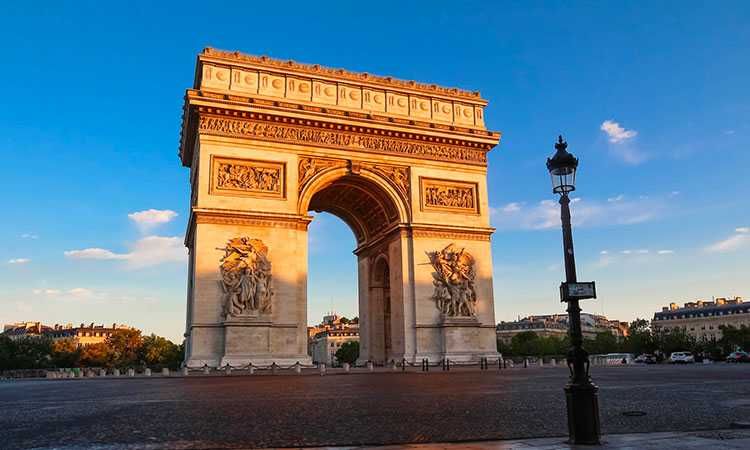 With our skip-the-line ticket, avoid the queues and make the most of your precious time visiting the Arc de Triomphe at your own pace.

This is an ideal spot to see and admire the avenues of Paris, starting with the most famous of them all: The Avenue des Champs-Elysées, the most famous avenue in the world!

Inaugurated in 1836, after thirty years of construction, the Arc de Triomphe celebrates the armies of the Revolution and the Empire. On its imposing walls are inscribed the names of famous battles and the people who fought in them. Added to this are numerous sculptures that contribute to the building's massive and exceptional character.

At the foot of the monument, the Tomb of the Unknown Soldier reminds visitors about the 1.3 million French soldiers who sacrificed their lives during the First World War. The eternal flame, which has burned uninterrupted since its installation in 1923, is at the heart of many tributes, including Armistice day, which is commemorated every year on November 11th. The tomb is also a solemn place of visit for foreign dignitaries.

To access the site, take the underground pedestrian passage at the top of the Champs-Elysées. On entering the monument, you'll have to climb 284 steps to reach the summit. It's a good workout but totally worth it. The roof is an exceptional vantage point for appreciating the beauty of the City of Light spread out before you.

The monument is open every day from 10am to 11pm between April and September, and from 10am to 10.30pm between October and March.
Please note that final entry is 45 minutes before closing.

The monument is fully accessible to people with reduced mobility.