Kill two birds with one stone! After visiting the magnificent Musée d'Orsay, hop on board a riverboat to observe the most beautiful monuments of Paris from the vantage point of the River Seine. 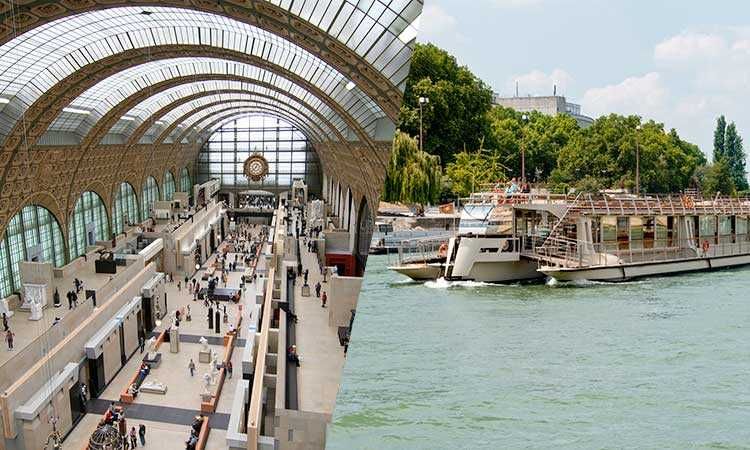 This offer is valid for two of the most popular Parisian activities, a visit to the Musée d'Orsay (with priority access) and an exciting cruise on the River Seine.

The beautifully adorned architectural masterpiece that is the Musée d'Orsay today has a very rich history. Before becoming the museum you see today, it was a train station; the Gare d'Orsay, which was built for the Universal Exhibition of 1900. This train station operated for nearly half a century before being reconverted and opening its doors as a museum in 1986. Before it ever became a train station and later a museum, however, the site was originally occupied by the Palais d'Orsay which was burned down by soldiers of the Paris Commune in 1871.

It is now home to one of the largest collections of Impressionist and Post-Impressionist paintings, including Edouard Manet's famous Luncheon on the Grass and Gustave Courbet's l'Origine du Monde (Origin of the World). It's not all paintings however, the museum has a rich and diverse collection of cultural works including many sculptures and photographs.

Once you've quenched your thirst for art, head for the banks of the Seine and jump on board one of Paris's famous riverboats and observe the capital while navigating peacefully the river which divides the city into its two halves, the left bank, and right bank. It's a perfect opportunity to photograph some of the city's most beautiful monuments from one of its most privileged vantage points; the River Seine itself.

Step 2 - Go to the Orsay Museum

Step 3 - Go to the Bateaux Parisiens

Your confirmation voucher is not an entrance ticket. To collect your tickets for both activities included in this offer, please go to our boutique located at 38 de la Bourdonnais, just a stone's throw from the Eiffel Tower.

The Musée d'Orsay is open from 9.30am to on Tuesdays, Wednesdays, Fridays, Saturdays Sundays and from 9.30am to 9.45pm on Thursdays. It is closed on Mondays.

There may be a small queue at the priority entrance, but the wait will always be shorter than the museum's standard entrance.

Both the museum and the river cruise are accessible to people with reduced mobility.