Take advantage of a great deal and kill two birds with one stone with this guided tour combo of St. Mark's Basilica and the Doge's Palace. Two spectacular buildings that are an inseparable part of the legend of Venice. 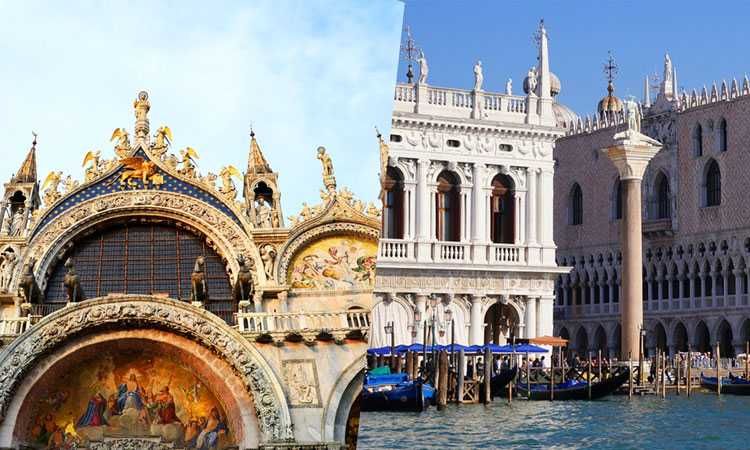 Take advantage of a great deal and kill two birds with one stone with this guided tour combo of St. Mark's Basilica and the Doge's Palace. Two spectacular buildings that are an inseparable part of the legend of Venice.

Located at St. Mark's Square, both buildings played a major role in the history of the Republic of Venice. The main religious centre of the city, the Basilica was built in the 9th century. Its remarkable architecture was inspired by several Mediterranean trends. To its Middle Eastern white marble were added elements from Greek and Byzantine cultures. The nickname of the building, Chiesa d'Oro (Church of Gold), comes from the impressive amount of gold used in its design and decoration. Count on our guide to show you all the wonders of the Basilica, from the mosaics to the ceiling ornaments, richly decorated with precious stones.

The Doge's Palace has long been the administrative centre and seat of political power of the Republic of Venice. This building, which survived several different fires, is also derived from a mix of architectural styles. It’s a large-scale work of art that should be under no circumstances missed!

With your guided-tour and priority access ticket, you won’t be wasting any time in the queue. Accompanied by our guide, you’ll get instant access to both monuments so you can start enjoying your visit straight away. Once the tour is over, your entrance ticket also lets you freely visit other emblematic monuments of St. Mark's Square and its surroundings, such as the Museo Correr, the Museo Archeologico Nazionale and the Biblioteca Nazionale Marciana.

To get there, there are two means of transport:

By vaporetto water bus: Line 1, Stop San Marco Vallaresso. Our guide will wait for you just beyond the Basilica.

By water taxi: Ask to get off at Todaro. Once back on dry land, head to St. Mark's Square to meet your guide.

Exactly as advertised; quick, efficient and friendly. Skipping the line was worth the money!