Tour of 9/11 Memorial and One World Observatory Ticket

Your first stop on this combo ticket is at the site of the fallen Twin Towers to visit the 9/11 Memorial, an open-air museum dedicated to those who lost their lives in the attacks. You will then head to the impressive One World Trade Center, whose observatory located several hundred meters above ground level offers one of the most impressive panoramic views of New York City. 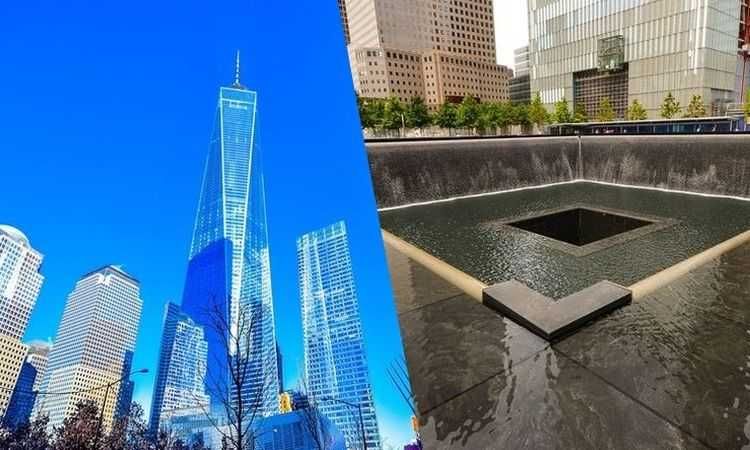 Your guided tour begins nearby at the Saint Paul Chapel. This church was miraculously untouched amid the collapse of nearby buildings, and quickly became a symbol of resilience for New Yorkers.
Immediately following the attacks, the chapel sheltered many survivors awaiting care and its iron railing became a popular spot for people to post search notices for missing loved ones. Your local guide, who lived through these tragic events, will tell you anecdotes about the day and the acts of heroism he witnessed.

You will then be taken to visit the memorial, where the names of some 3,000 victims are inscribed around two large man-made waterfalls symbolizing the void left by their absence.

At the end of your visit, your guide will give you your skip-the-line tickets for the One World Observatory at the top of the 541-meter-tall One World Trade Center, which today dominates the New York City skyline.

To get to the One World Observatory, you'll be taking the SkyPod, an ultra-fast elevator that climbs the 102 stories to the top in just 47 seconds. During the ascent, an animated film will retrace the evolution of the city of New York, known for its many skyscrapers.

Your ticket for the One World Observatory is valid only for the time slot printed on it. If you miss your slot, tickets can neither be exchanged nor refunded.
It is advisable to arrive about fifteen minutes before the designated time slot on your ticket.

Access is free for children under 5 years of age.
Your skip-the-line ticket does not allow you to jump the queue that can form at the security checkpoint.

The guided tour of the memorial is in English.