Discover the Lagoon City and its canals by gondola while being romantically serenaded by your gondolier. 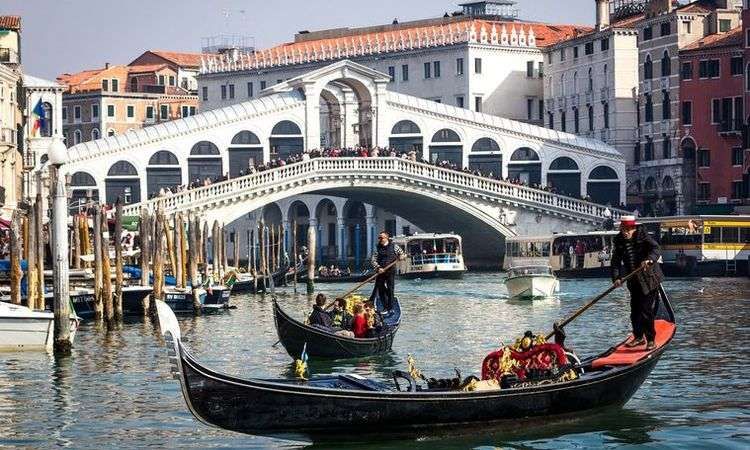 While visiting Venice, don't miss out on exploring the city's canals aboard a traditional gondola.
With FastPassTours, step on board, settle in and enjoy a romantic half-hour trip through Venice's famous network of canals. During your gondola ride you’ll be able to admire many of the city’s most beautiful monuments and features including the Grand Canal, the Basilica di Santa Maria della Salute, the Teatro La Fenice, the Ponte dell'Accademia and the Palazzo Venier dei Leoni which houses the Peggy Guggenheim Collection.

The very symbol of the Lagoon City, gondolas are slender black boats propelled through the water by the gondolier and his one single oar.
These iconic boats have existed since the tenth century but it wasn’t until 1562 that a decree laid out guidelines regulating their size and colour. Before that, the wealthy and ostentatious residents of the city would go to great lengths to outdo each other when decorating their gondolas.

Works of art in themselves, gondolas must meet certain strict criteria including a length and width of 10.8m and 1.38m respectively. 280 pieces of wood and two metal parts are used in their construction and the final structure is not allowed exceed 600 kilograms.

The iron ‘ferro’ figurehead, identical on all boats, is used as a counterweight and also acts as a type of bumper. The six forward-facing horizontal bars symbolize the six areas of Venice, while the rear facing one represents Giudecca Island. The boat's curved shape represents the Grand Canal and the empty space between this curve and the first horizontal bar refers to the Rialto Bridge. Apart from aesthetic considerations, the asymmetry of the structure, with its higher portside wall, balances the weight of the gondolier on the starboard size, with the ensemble permitting the gondolier to propel his boat with relative ease.

For the length of your ride, you will be treated to several classic Italian songs by the musicians.

Show your voucher to the Gondolier

Children under the age of two travel for free!

Gondola rides are closed to the public on the 25th of December and the 1st of January. "Discovering Venice" reserves the right to cancel operations during adverse weather conditions.

Please be at the meeting point 15 minutes before the scheduled start of your ride.

All ticket sales are definitive and no refunds can be given.